(to be sung against a continuum of ignorance) 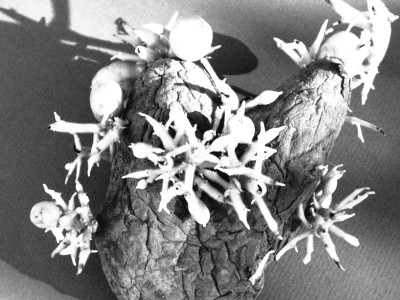 A recording is not yet available.

About the compositional process of this work

As a composer, I listen to my surroundings, I listen into the world. Listening, I reach inside phenomena. My visual perception lingers at the surface. In my everyday life, in my urban environment, an abundance of shiny surfaces entices me to look, to buy, to consume. Metal, plastic, glass, lights, gadgets, shop windows, cars, screens … surfaces dazzle my eyes and mind.

My ears are alert, keeping vigil. 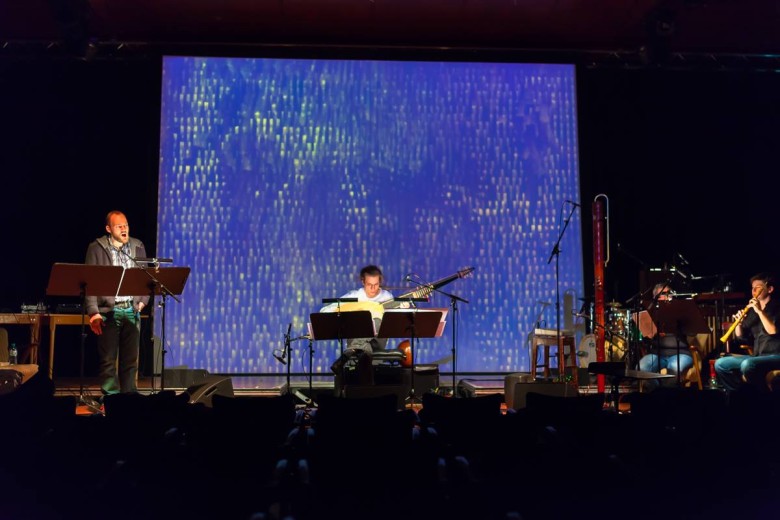 Foto by Markus Sepperer, general rehearsal of the piece. Visuals by TE-R.

Another perspective: a potato, heart-shaped

I bought a bag of good potatoes from a farmer and stored them in my basement. In a cool place, a potato is alive. A singular potato was left to itself at the end. I noticed the heart-shape right away, decided not to to eat it and put it back down into the bag. I forgot about it.

Weeks later, I rediscovered the potato. It was alive and had changed. 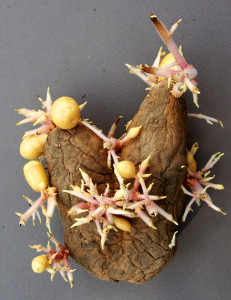 The natural process of decomposition appears to be efficient and elegant at the same time. Generosity manifests in how this potato, this lovely underground lump of a plant dries away, giving itself away to future generations. The surface shrinks, the skin decorates itself with wrinkles, crevasses, cracks, and crannies. Beautiful: like elephant skin.

To punctuate the facade of superficiality

For this composition, I looked more closely into my relationship with pop culture, from my perspective as a feminist composer and experimentalist. This was because of the festival’s theme Pop.Song.Voice. In much of today’s mainstream pop culture, I notice a high affinity towards the visual. Pop music seems to be ruled by the visual dimension and subject to the strict aesthetic rules of the genre.

I find myself bored by the visual perfection of a striking dream land. In many pop productions, the singer’s voices are technically manipulated to perfectly fit the given code and style.  No faults are allowed, shortcomings are to be erased. Total control rules in the lustre of commercial pop; for my taste, much of it is too boring and too predictable.

Pop culture seems to thrive on magic. In my work as a composer, I want to punctuate magic, to crack the veneer, rather than sustain the glossy fabric of illusion and dreams. For the composition, I reflected on these questions:

What is hidden underneath the facade of pop culture?
From the crannies of the brilliant surface, what comes forth?
What is concealed by perfectly trimmed voices?
What is commercial pop afraid of, which themes are not addressed?

As I compose, I generate future. This is what I argued in my lecture at the Wien Modern symposium about my work, drawing on the brilliant essay of Byung-Chul Han ‘Im Schwarm. Ansichten des Digitalen.’ 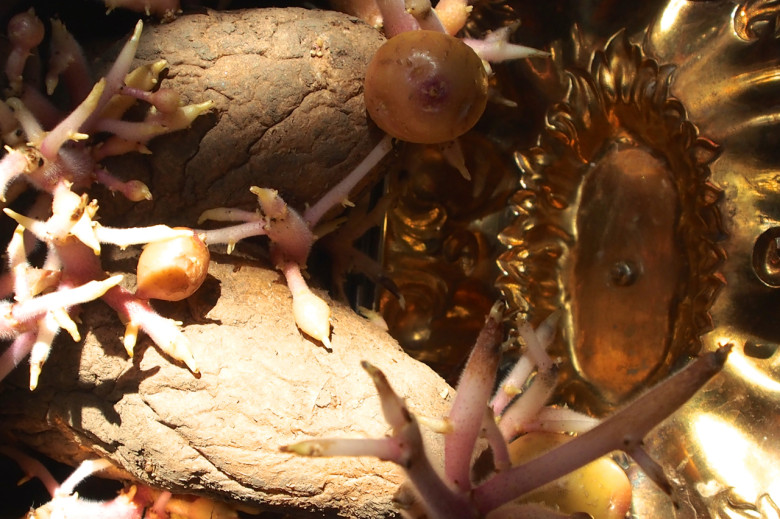 Over the course of weeks, I watched how the potato permanently changed. The slow manifestations of decay demonstrate the future arising – from a microbiological perspective. My compositional process appears to evolve in a similar way.

I keep an old silver casket which belonged to my grandmother. The inside of the metal box is lined with gold paint. I carefully placed the potato with its plant appendices inside. A baroque treasure.

Later, I placed the potato into a large pot with earth, and left it for a while. Summer changed into fall. The potato grew and expanded. 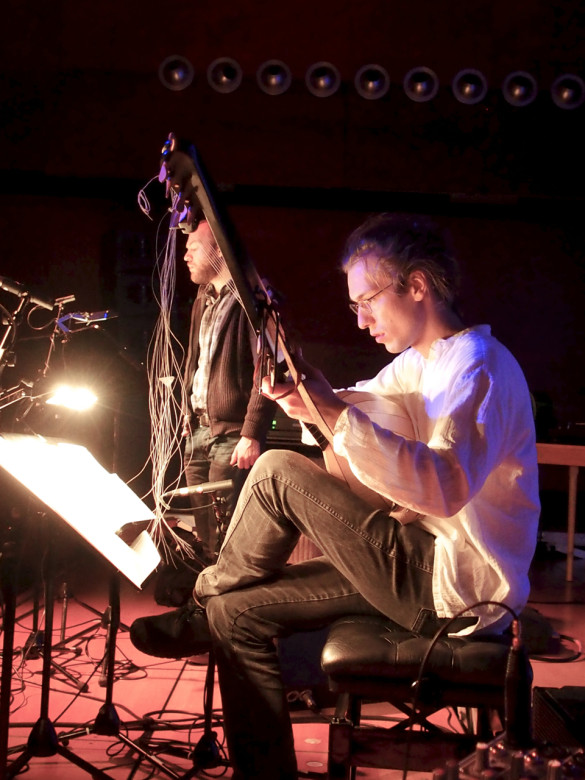 I mainly argued against commercially oriented pop here. However, I notice that I would raise similar critique towards the classical music industry as well, actually against any commercialised music genre, including the business of new music. The question probably is how to balance economic issues against artistic considerations. I find it important that the music business allows for openness and invites risks, uncertainty, and experiments in composition and performance.

In this composition and text, I wanted to focus on fragility and transience. I decided to work with historic instruments; the sound of a theorbo seems to convey joyfulness and timbral richness. A countertenor. A baroque oboe, to support and augment the voice, also to perform very long sustained tones, plus some electronics, and recorders.

The lyrics of the work came to my mind right after handling the plant object. I took pictures and filmed the potato. Here is a short cutout of the text.

No shiny surface
non-existent over death
therefore I am
No!
Lockung ins Nichts.

I am so empty
I am

Underneath consumption all is emptiness
death covers non-existent surface

Repeat, over and over: pop out pop up pop skin pop surface pop folds

clefts
smell of dirt
earth shelters a life
and rotting.

Within folded skin
this heart of gold shimmers

Between fingertips
dirt crumbles to dust

the folds and fissures of decomposed old self.

microbiology does the trick

my body breaks apart into a canopy of darkness.

this opulent voice
until it is consumed and silent forever.

I dug out the potato. It has swollen and grown, it has become heavier and bigger than before. The small balls adhering to its roots have grown, too. The entire arrangement manifests generosity.

The skin is not elephantine any more. It is moist and strong, the folds are smoothed out. One edge of the heart has turned mushy and is being eaten away by an earthworm. 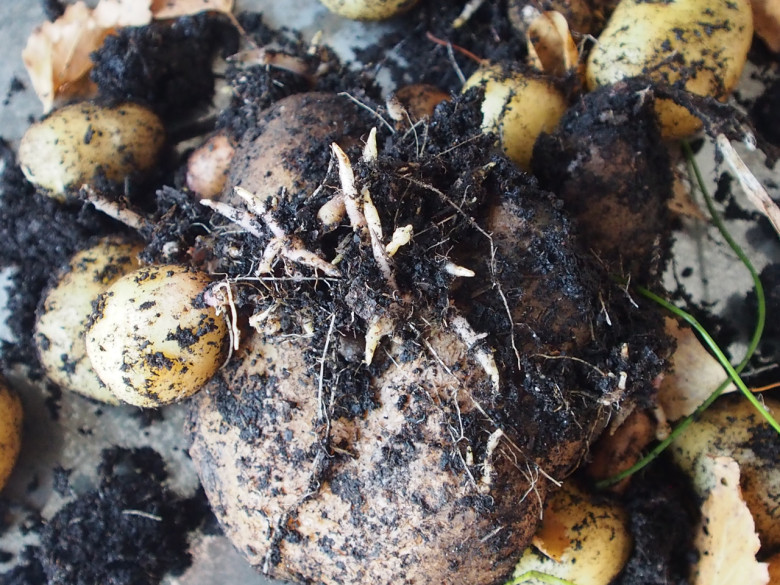