The forests of southern Finland are known to be rich in mushrooms and berries. Since my childhood, that is, as long as I can remember, I have been foraging for edible plants in the woods near Vienna – taught by my parents, with contagious passion. Upon arrival at the Örö residency quarters, the old school building situated within the forest, I was delighted to discover mushrooms growing right in front of my window. Moreover, my residential colleague, environmental researcher Marja Salo, herself a skilled and ardent forager with a broad expertise in Finnish berries and mushrooms, shares my enthusiasm.

It helps a lot to know that I can identify my harvest with her;  Marja’s knowledge of local plants allows me to safely forage in a foreign environment. Beyond the question of safety, the culinary potential of the various findings is discussed, among likeminded practitioners of the art. 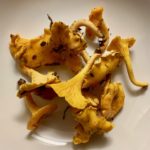 In the archipelago, the fall season is extended, because the sea cools off more slowly. After this year’s exceptionally hot summer, a nice variety of berries and mushrooms is still available –  enriching the limited range of supplies we brought here. Risotto with mushrooms and mushroom sauce are delightfully tasty. Rose hips and cranberries turn into wild desserts, or add flavour to porridge and apple crumble. An exploration into strudel with blueberries, including self-made strudel dough, was also successful. 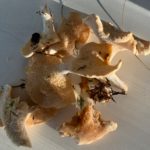 Sea kale is a pioneer plant growing on the shore. Its green leaves are edible, have a nice, crisp texture, with a taste similar to kale, fresh and slightly salty. However, the plant is strictly protected and should not be harvested by humans. Caterpillars may do so. 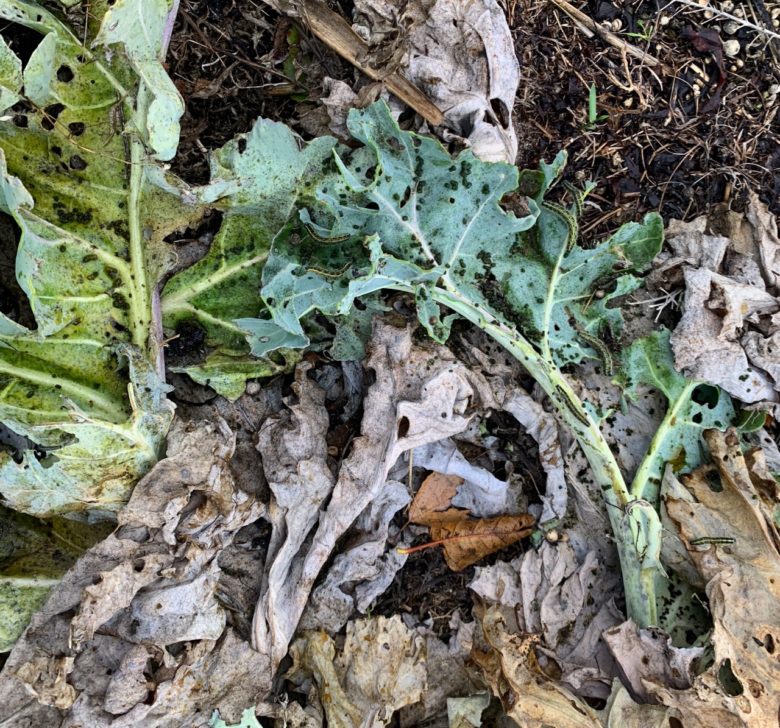 In his brilliant essay The Art of Mushroom Foraging Roope Kaaronen explores perceptional processes in connection with mushroom harvesting. Here, I learned about the Finnish term apaja – quoting Kaaronen:

“A forager does not generally enter a forest without prior experience and knowledge. We have a curious word in my native language, Finnish, for this: apaja. Apaja loosely translates into “area known to have plentiful catch,” entailing a higher prior probability for encounter. I know, among several others, of chanterelle apaja, bolete apaja, milk-cap apaja, and my personal favourites, yellowfoot and black trumpet apaja. Curiously, knowledge of an apaja, whilst socially transmitted, is often kept a guarded secret within an in-group. An unwritten rule applies: You do not talk about an apaja with strangers.”

“An apaja is generally understood as a physical and material space in the environment, as a location a forager enters. Upon closer inspection, though, this is not entirely accurate. An apaja is more akin to a predictive cognitive map, which is validated against the ecological information harvested from the directly perceivable environment. Specifically, an apaja is a prior expectation, a prediction, pertaining to the distribution of mushroom species in the environment.”

It seems to me that certain parallels exist in human behaviour, regarding the mushroom apaja of Finland and the job/security apaja of Austria: locals do not want to share it with strangers.

In Finland, foraging including fishing is granted and regulated via the Everyman’s Right. Details can be found at the website of the Ministry of Environment under
http://www.ym.fi/en-US/Latest_news/Publications/Brochures/Everymans_right(4484)