Even in a remote place like Örö it is possible to shop online and receive mail and packages.

Setting up my workplace, I found out that a specific cable was missing to connect my laptop to an extra screen. After some consideration, the best solution seemed to order the cable via internet from a local provider based in Helsinki. Shopping online was easily accomplished. The order had to be placed in Finnish; this I managed with intuition and help from my Finnish colleague Marja Salo.

My shipping address is

‘Linnake’ is ‘fortress’ in English.

The package would be shipped to the nearest post office, to be picked up by either by myself  – or by a person with an official authorisation. The post office is located in the store in Kasnäs, in the small harbour from where the ferry leaves, and where I bought most of my supplies. Within two days, the package arrived in Kasnäs. Via analogue communication – a quad bike stopping in front of the residency house and the driver personally calling on us –  Marja and I were informed that this week’s ferry on Thursday was cancelled. Instead, there would only be a smaller boat very early in the morning doing necessary transportation. Too early for the post office… it would not be open yet.

By the way, most inland ferries are free in Finland, such as the one I took from Kasnäs to Örö. They are considered part of the road system, ensuring free transportation in the country.

To get my order to the residency, I depended on further support from maintenance people of the forestry department: one of them agreed to pick up the package during the opening hours of the postal provider, in time to take it with him on the early boat trip the next day, when he would come in to Örö for work from the mainland. 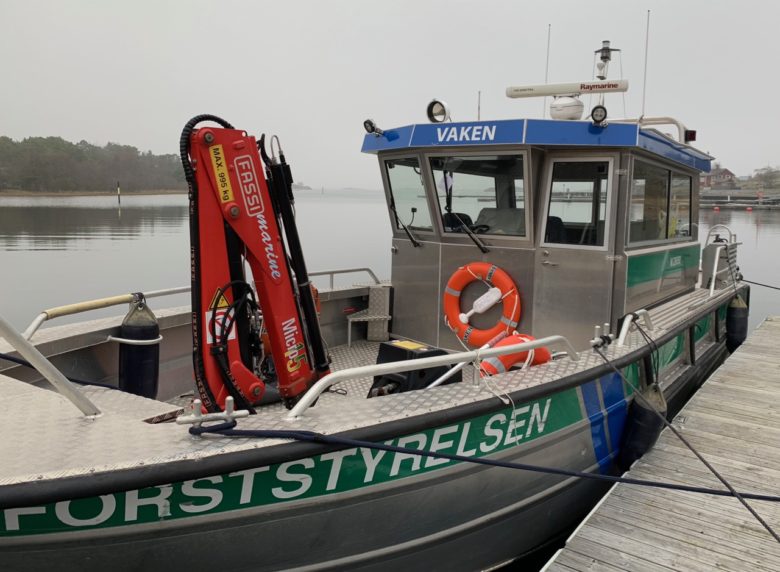 Finnish postal services are well organised and work efficiently; the large country is sparsely populated. The Kasnäs post office was strict about an original warrant. That is, the correct form must be downloaded from the internet, printed, filled out, and signed. At the residency, it took us quite a while to get the printer going… finally, success. Next, the correctly signed form had to be delivered to the maintenance boat, as was agreed. Much thanks to Marja, who can so much easier communicate about these intricate matters with everyone, in Finnish!

If you look closely, you can see the folded warrant behind the boat’s front-screen wipers. 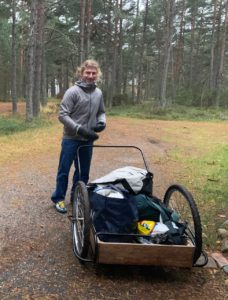 The Thursday morning ship also brought two weekend visitors from Helsinki, Marja’s husband and her friend. Within this wheel cart, the mail package travelled the last leg of the journey, from the landing place to our house. 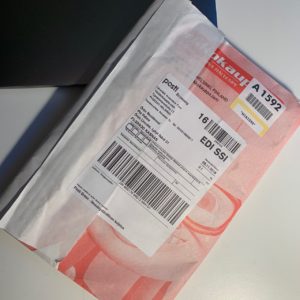 Altogether, I received the cable within four days, thanks to the interplay of digital and analogue means, directed by human interaction and cooperation. Composing a piece from sounds gathered in field recordings, I much appreciate the extra screen space. Even more so, I am grateful for people’s readiness to communicate, help, and cooperate. 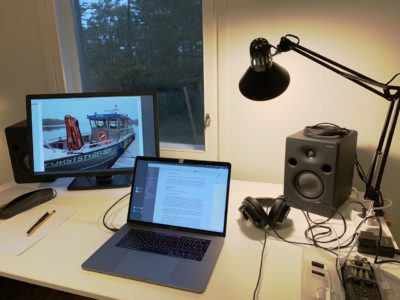