The island is a quiet place these days.

The weather is cloudy, slightly misty, only a gentle breeze. Sounds of nature dominate, with the roar of waves as loudest appearance. No cars. Almost no airplanes pass over the land, much different from home. Occasionally a quad bike passing the residency house, once or twice a day a tractor. Maintenance men tend to the military sites and historic places before winter comes; they empty garbage cans and even clean the patch of lawn in front of the surveillance tower from fallen leaves – I couldn’t believe my eyes, as I walked past.

Since the wind was quiet, I decided to do recordings on Hangover Hill, on the western beach. When I first explored the site a few days ago, a plan for a piece developed right away. On top of a metal mast, a radar rotates, emitting a constantly cycling pitched sound. A (forbidden) subterranean military site is covered by a huge metal dome, featuring a large museum gun on top. Visitors are allowed to climb up to the dome and gun. 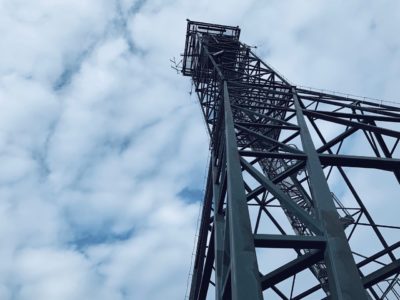 By attaching a contact microphone (the AKG C411, one of my favourite mics) to the hollow mast structure, I recorded the sound of the radar. 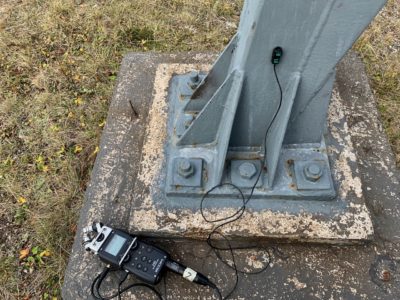 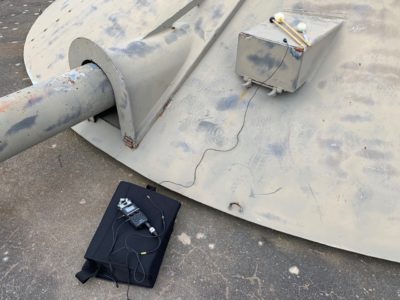 Then, I climbed the hill to work on the dome. For that I had brought two beaters and my superball. During my first visit to the site, I had found out by experimentation that the huge cavity underneath the dome acts as a resonator.
Via contact mic, working on the iron dome with beaters, I planned to record a selection of samples. 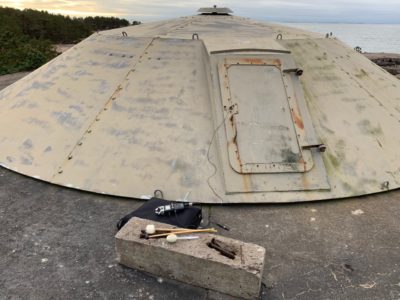 I set up my gear and attached the microphone to the dome. Putting on earphones, I was surprised to hear male voices arguing inside. Men tapped on the metal structure from within, before I could act with my beaters. Happily, I recorded their conversation, and after a while began to use my superball on the structure. The noise is unexpectedly sonorous… the small silicone egg mounted on a nail file exciting the huge military dome to sound…

Of course, men came running out right away, curious about the sound source. As it turned out, they were workers from the maintenance inspecting the building. Some sound interaction happened after they reutned to their work, they tapping from the inside, I from the outside.