I have never stayed and worked in a place as remote as Örö island. Travelling from Helsinki by bus, we passed though Salo to Taalintehdas. Human settlements thinned out and gave way to fields and cultivated landscapes, later woods, water, moss and boulders came to the foreground. A taxi brought us to the tiny harbour Kasnäs. From here the weekly ferry runs, direction Örö and back again. Us: that is Marja Salo from Helsinki, scientist in residence, and myself, all our luggage and food supplies, my instrument. From the well equipped local store I picked up further supplies, already packed in boxes – including a share of fish from a salmon farm next to the landing place. 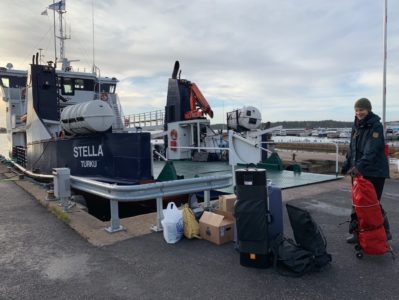 In excellent weather, the ride through the archipelago to Örö took about 35 minutes. The ferry navigated through island of all sizes. Gently rounded patches of stone, some a mere rock looking like the curved back of a whale; some islands stately sized and covered by dense wood, even bigger ones hosting small red houses with a landing place. Occasionally, a modern holiday home came into view. The view: endless variations of shallow rounded rock, trees bent from the wind, moss, and water. After a while, the scene roughened, with a colder wind coming up. The scattered islands appeared more flat and barren, tress gave way to shrubs. More and more barren rock dominated the scene. No living being in sight, except for a few birds and, occasionally, a pair of white swans swimming in formation. Then, Örö. The last appearance of land before the expanse of the Gulf of Finland stretches out to meet the Baltic sea. 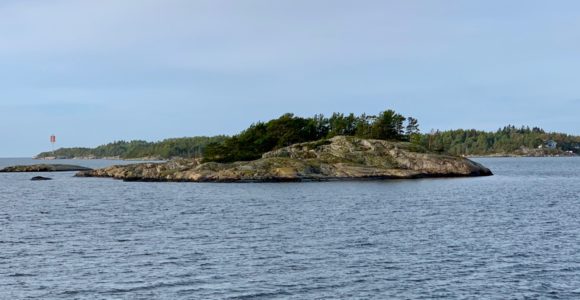 That could mean: far from civilisation. Far from shops and amenities of urban culture. Far from friends, partners, family. Far from home, from Vienna. From the mainland. From Wien Modern. I miss the audience’s company. I long for the sparkling entrance hall of Konzerthaus Wien, for the concert atmosphere, for spirited smalltalk and and a glass of wine, or else. Then catching the last U4 towards home. 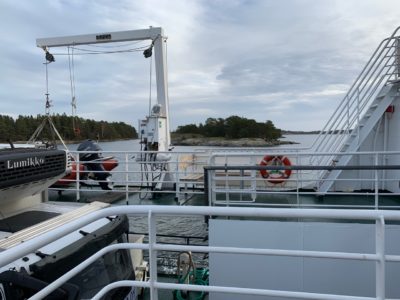 During the landing manoeuvre, the engine of the ferry emitted an eery machine noise. To me, it sounded like a heart torn by longing. The remoteness inevitably brings forth s sense of longing. The sense of longing is strong and connects the world to me. Through longing, the entire world is mine, to share.

A quad-bike transports us to a red house in the woods. In a former school building, we set up our rooms, kitchen, workspaces. A lot of moving furniture around and some cleaning as well. A classroom turned into a kitchen transforms into a decent living room. The residency space had been moved this year, necessitated by renovation work in progress. A good living situation is essential, much time will be spent inside, as darkness falls early now.

We walk to the West beach before sunset. At Örö it is not as cold as I expected it to be. The warmth of the summer is still stored in the ocean. This year was exceptionally warm in Finland, too.