Exploring the small island Örö, I found this huge cast iron object; it is a historic mortar from around 1910 that was used only a couple times in military experiments and then discarded. It fell off its wooden stand on a small hill in the middle of Örö, and rolled down until it came to a halt below. Over the years, the forest grew around the bowl, so the mortar is now surrounded by trees and filled with dirt and natural compost. Beautiful, large ferns grow in it. I found myself immediately attracted to the object: an ancient discarded mortar that now serves as a flower pot – lovely. A deadly weapon was occupied by plants. And, interestingly, it still sounds like an iron bell! I tried out several positions on the outside and different modes to extract sounds from it. From these experiments, I developed a performance and a text to go with it. 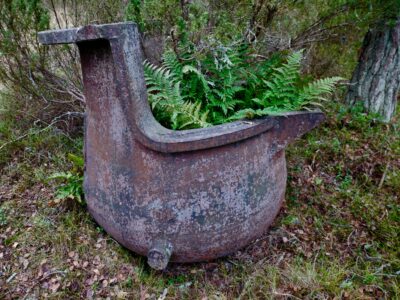 A poem written on site

I strike the bowl bell
Twelve times
And more

Don’t ask
For whom
What for
Why
Is it art? Is it music? Is it foolish?

The fern bell
Tolls
For thee