Text & text compilations by Pia Palme. All English passages are excerpted from The Waves by Virginia Woolf. My German texts reflect on a passage (about the rose, and its name) from Romeo and Juliet by William Shakespeare.

Composed for the festival V:NM Graz 2015
Produced with Prof. Annette Giesriegl’s class at the Jazz department of Kunstuniversität KUG Graz 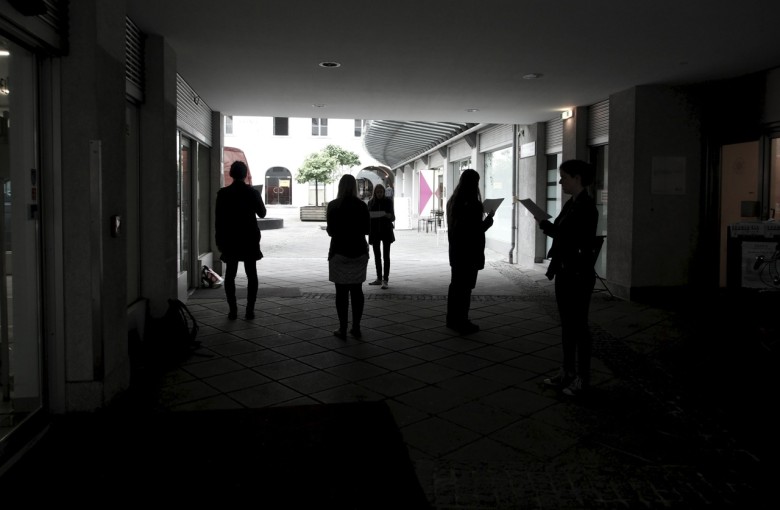 In this piece I compose irate noise

arising from the depth, out of the cracks and crannies opening within a smooth beautiful surface. Wrath is

patterned onto a pleasant vocal surface.

Video live recording of premiere with

BIRDSONG CRANNIES from Palmeworks on Vimeo.

This piece is part of a body of work

in which I explore the potential of punctuation as a compositional principle. My work and research are deeply linked to my personal experience. I am born in Vienna and have lived here for most of my life. Austria is a beautiful country with a rich cultural heritage. Life can be comfortable and pleasant in Vienna. However, there is tendency in Austria to hide the unwanted underneath the surface; certain themes are not discussed in public. Literally, in the basements, darkness is hidden.

I learned to listen into that silence.
I listen to the hidden sounds and voices.
As a composer, I listen both outside and inside.

In this composition, singing alternates with spoken passages. In the beginning, the spoken sections are whispered. As the composition unfolds, the spoken passages become more pronounced, turning into noisy and irate vocal utterings. Wrath never becomes loud in this piece; I experience strong wrath as contained and soft rather than loud. When I feel wrathful, there is a level of cold-blooded control and planning going on, before I would execute a wrathful action; I would not act on impulse, I would think before I act. I imagine a fictional wrathfulness in this work, which might be connected to the things unvoiced and hidden. Wrath and hidden understructures affect the social environment, they block and obstruct the welfare of the community. I can hear their noise, if I listen into the silence.

In my German text, I reflect on a passage from Romeo and Juliet in which William Shakespeare uses the image of a rose to lead a discussion about what might be essential for a person’s identity. Juliet talks in a poetic way about how a person’s ‘identity’ is constructed through their name, or through the outward appearance that can be perceived by others. But the true essence of a person – she talks about Romeo here – is beyond any of those categories, which are essentially empty and meaningless to her.

I contrast the German text with excerpts from Virginia Woolf, about birds and their activities being observed in a garden. At a closer look, the birds are transformed, and turn from lovely creatures into uncanny, cruel beings which fight among each other, pecking and killing. Both the English and the German texts are deconstructed and interlaced in my composition. With this method I want to open up space for a more direct mode of listening. In the space between the texts, the ears might listen into the interior of a situation, beyond the surface appearance.

A review in a Styrian newspaper (M. Gasser in Steiermark Kronenzeitung, see below) about the festival shows the performers of BIRDSONG CRANNIES and states that the piece “continues a line of vocal tradition grounded in Cage’s concept music and Ligeti’s vocal music”.

The light struck upon the trees in the garden,
making one leaf transparent and then another.
One bird chirped high up;
there was a pause;
another chirped lower down.

The sun sharpened the walls of the house,
and rested like the tip of a fan upon a white blind
and made a finger-print of shadow
under the leaf by the bedroom window.
The blind stirred slightly,
but all within was dim and unsubstantial.
The birds sang their blank melody outside.

Sharp stripes of shadow lay on the grass,
and the dew dancing
on the tips of the flowers
and leaves made the garden like a mosaic of single sparks
not yet formed into a whole.

The birds,
whose breasts were specked canary and rose,
now sang a strain or two together,
wildly, and were suddenly silent,
breaking asunder.

In the garden where the trees stood thick
over flower-beds, ponds and greenhouses
the birds sang in the hot sunshine, each alone. 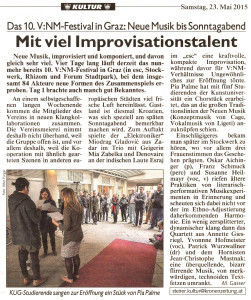