“…such an engineer, scientist, or “first-order” cyberneticist, will study a system as if it were a passive, objectively given “thing”, that can be freely observed, manipulated, and taken apart. A second-order cyberneticist working with an organism or social system, on the other hand, recognizes that system as an agent in its own right, interacting with another agent, the observer. As quantum mechanics has taught us, observer and observed cannot be separated, and the result of observations will depend on their interaction. The observer too is a cybernetic system, trying to construct a model of another cybernetic system.”1

Inspired by Heinz von Förster’s Theories of second order cybernetics, I have been working on a format which would enable an ensemble to function as a self-regulating system. First experiments started in 2006; I have been using it in performances over the years, and want to refine it further.

The aim is to enable performance of a complex polyphonic composition

The concept links the composing and performing process together, empowering the performers to take a more active role (but not through improvising) and directly engage them in the process of decision-making and creating music. Listening is re-installed as a key component of performance itself.

Also, the position of the performing musicians and the audience can be chosen at will. It is not bound by any technical or systemic restrictions. Some other possible effects of the format will be discussed later, such as certain “biotic” sound effects similar to electronic delays, eroding, distortion etc. 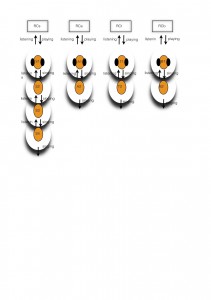 For performance, S1, A2, T1 and B1 wear headphones and listen to the appropriate recordings of their parts. Every one of them simultaneously performs what he or she is hearing. This should be done with as much awareness and precision as possible. Performing on time is more important than the exact reproduction of the audio material. Use your own judgement on what you reproduce.

“Satellite” performers S2, A2, T2 and B2 stand close to their respective partners. They listen to what S1, A1, T1 and B1 perform, and following the same principle as above, perform another version of the respective part.

This structure can be expanded at will. More performers can be added on, such as S3, A3 etc. S3 could be instructed to perform listening to S1 or S2, which would alter the result (especially if more satellites are added). Or performers can be reduced to just one, with no satellite at all. Also, more parts can be added, in the case of a bigger ensemble/choir.

This structure provides a form, which functions as a multiple-use-container for compositions. Obviously, the concept influences composing (feedback loop). The format works best for compositions which respect and take into account the listening/performing process and its natural latency. Textural and atmospheric structures seem most workable. It is not possible to control  performance completely. Personally, I experience this not as an obstacle; it seems like an attractive way to integrate aspects of chance in the process of performance.

Also, the “biotic delay effect” can be used and enhanced by adding more performers to every part. Instructions could vary for satellite singers, such as to only “shadow” the material, or to select certain elements of it at certain times, etc.

Further variations of the format are possible: It might be attractive to create and add an electronic soundtrack to a piece, using the recordings of the separate parts, and processing them electronically. It could also be possible to develop a similar format for instrumentalists.

As in general, performance will benefit from practice: in my experience, the technique of simultaneous performance can be trained effectively. Although this technique seems to facilitate performance, it does require not only more awareness from the interpreter, but also more dedication and openness. The performer cannot “hide” behind any music held in hand; also, he or she cannot look ahead to see what will come next. Rather, one has to be completely on the spot, to trust one’s perception and to be ready to jump into performing sounds, on immediate decision.