ON A FORMER ISLAND
a theatrical ecology 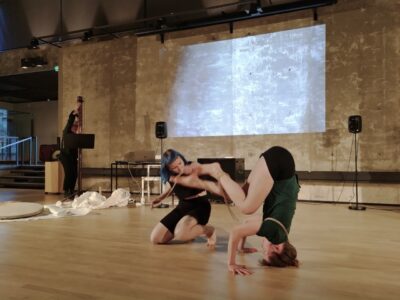 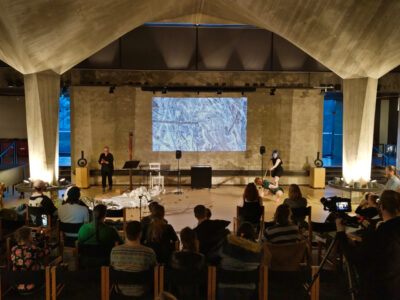 ON A FORMER ISLAND is a theatrical ecology that brings together sound, dance, text, humans, visuals, paper, plant material, and anorganic matter and was developed for the Sibelius Museum. The piece was initiated by the composer and artistic researcher Pia Palme (Austria) and conceived, realised, and staged with Elie Halonen, Satu Hakamäki and Tuomas Laitinen (Finland). The artists met during their residence at Saari in March and April, found that they share a deep connection with nature and ecology in art, and decided to enter a risky collaborative process to develop a performance. They further joined with vocal artist Mari Zhiginas (Ukraine). Siiri Viljakka, comic artist, projects the performance onto paper by means of simultaneous sketching and drawing. For all artists involved, the interaction of disciplines in this form was new and offered space for joyful experimentation and discovery. 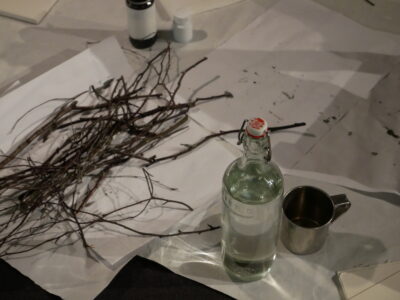 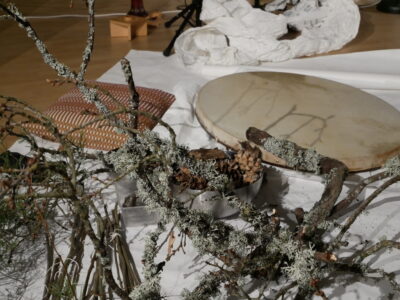 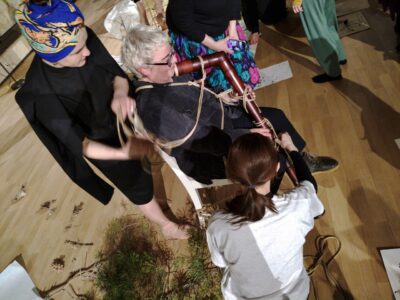 The idea behind the performance

This piece is presented as a theatrical ecology, meaning that it brings together a collection of human and non-human materials—performers and an audience; digital and analogue instruments, equipment, and artworks; themes and texts; objects gathered outside in a forest—in a well defined space (a stage) and time. None of these elements is privileged. Together, they form an ecology. They all interact, and their interactions can only be balanced, not controlled.

The title refers to the fact that many places in Western Finland were once under water. What we experience as hills today were islands, less than 1000 years ago. This is the case in Saari. Indeed, the Finnish name of the region ‘Saari’ (where the Konen artist residence is situated) means island. 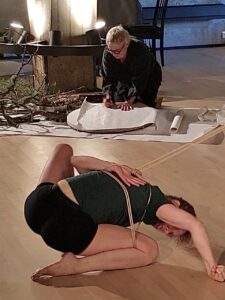 The piece was initiated by myself—after a visit to a concert at the Sibelius Museum—and I worked to realise the performance, in contact with the museum curator. That included the activity of introducing the idea to my fellow artists at the Saari residence, inviting and bringing together more performers, as well as organisational aspects concerning the cooperation with the museum. I worked to establish and nourish a group collaboration that would carry some meaning and have artistic strength at the same time, while keeping the space open for others to join. Experimentation began as a trio with Elie Halonen and Satu Hakamäki: in our first sessions, we immediately discovered a common ground to work from. Tuomas Laitinen entered as the much needed dialogist and outward eye. Siiri Viljakka came in as a visual artist; her drawing and sketching activity is immersed in the space between the performers (us) and the audience: Viljakka not only carefully watches but also interacts with us, through her works. After the collaborative ensemble was already established and rehearsals had progressed, at a very late time, the group further integrated the jazz singer Mari Zhiginas, who had just arrives from the Ukraine—and, finally, the young drawing student Anastasia Zhiginas, too.

In the end, it is impossible to pinpoint authorship: who was responsible for the piece, for aspects of the piece? Okay, I initiated the whole thing, and some elements can indeed be connected to certain contributors: sounds, voices, ropes, movements… Yet, many (most?) things just happened because we collaborated, experimented, commented, and together discussed our process. Personally, I did things in this performance which I had neither imagined nor done before—my actions were inspired by the entire situation, by the artistic ecology I/we co-inhabited. In so doing, I acted as a composer in the best sense of the word—as I want to understand it: composing means working towards bringing people and materials together in a most meaningful way. Making decisions in favour of openness and ecological vision and development. Doing so without claiming territory and, instead, by inviting space for sound, art, and movement to emerge and interact. Contributing to establish a theatrical ecology.

The piece begins with a kind of invocation, a solo for bass recorder and spoken voice. This passage follows a dramaturgy in itself, I use a musical structure which I developed in 2019 and a new text which is written for the occasion and mentions various places, buildings, and characteristic qualities of the environment around Saari and in Turku. It is accompanied by an ambient video of a broken tree which I found in the forest; the structures of the ruptured and decaying wood are full fo detailed patterns. Then the shibari performers enter, processed field recordings sound via loudspeakers, and I change to my special percussion set arranged around the big frame-drum on the floor. While Halonen and Hakamäki perform as a duo, I produce sounds with ‘writing’ on paper. Then I change to biological material. Using various techniques which I found through experimentation, I tease sounds from the skins of snakes, cones, twigs, larger branches, adding small stones later.  I switch to bigger branches. Plant material is thrown at the stage, and some cones into the audience, too. At certain times, I recite English texts about perception, the relationship of art and nature, my work, and autoethnographic observations. Singer Mari Zhiginas circles the audience, moving through the spaces around the audience, improvising with a rather quite but clearly audible voice. Another video now shows adders which I filmed, in their unique nesting places at Saari. Then, I bring paper on stage to the dancers, and begin to wrap Satu Hakamäki. While Elie continues, gradually fixing Satu and arranging them into a kind of ritual sculpture, I again perform with bigger branches. I then circle Satu while performing with a portable bass recorder. In the final passage, I take place on a white chair on stage, and Elie Halonen ties me to my instrument. Mari Zhiginas now enters the stage and stand behind me, shading her eyes with both hands. Her voice becomes louder at this point. The electronic music now features a drone-like composition of motor-sounds which I recorded in the forest. While the ropes cover me more and more and my movements become extremely limited, I continue to recite and perform, nevertheless, until the very end, when Elie Halonen leaves the stage, while Mari Zhiginas and I remain for a moment in silence, for the final scene.

About the collaborators who created the storyboard

Pia Palme: As an artist, I do things. Listening is at the core of what I do, it is the binding activity that connects me with the planet. My compositional practice is an ecosystem that includes myself as part of it, together with all human and non-human, living and non-living elements, technologies and instruments. I observe how the various practices and materials interact with each other, how they grow, evolve and decay. Based on these observations, I compose. My practice allows me to make plans for what lies ahead, to envision an ecofeminist future.

Elie Halonen is a Turku based visual artist and a bodyworker. Their studies in sculpture combine with their practice of shibari (japanese influenced ropebondage). In their work Halonen explores the somatics and materiality of the human body finding ways for emotions to take sculptural forms.

Satu Hakamäki: I have worked fifteen years as a freelance artist with contemporary dance, circus and theatre. Nature, interaction, empathy and power relationships are my eternal points of interest. My dream is an open, honest and present way to be. My needs are eye contact and touch. My sources of inspiration are different places and people, curiosity, playfulness, adventuring and exploring. I work rather in a group than alone. The best place to work is by the sea or in a forest, but once in a while I also need a flat floor.

Tuomas Laitinen works as a director, performer, writer, curator and teacher between the fields of live and performance art, contemporary theatre and contemporary dance. Laitinen’s artistic practice is particularly focused on questioning the role of the audience, experimenting with it, and consequently developing new forms of performance. Currently, he works with a doctoral research project at Performing Arts Research Center Tutke, Uniarts Helsinki’s Theatre Academy, and is a part of the curatorial group of the Stage for Contemporary Performance at Helsinki City Theatre.

Siiri Viljakka is a comic artist based in Turku, Finland. She specializes with longform comics that deal with humane struggles from a queer gaze. Viljakka is currently drawing a storyboard on a partly autobiographical project REKKIS, which combines comic art and drawings about butch identity and female masculinity. In addition, they are drawing a fantasy comic about orc warriors together with Tuomas Myllylä.