No noise is an island

As I walk through the city I notice more traces of other beings from the past. Watching my steps on the uneven pavement I see a lot of black marble under my shoes. Often the stone is shiny and polished; Brussels loves polished black marble. The dark stone bears the delicate white traces of seashells and ocean creatures of ancient geological aeons. Their body parts have petrified and now I step on them. 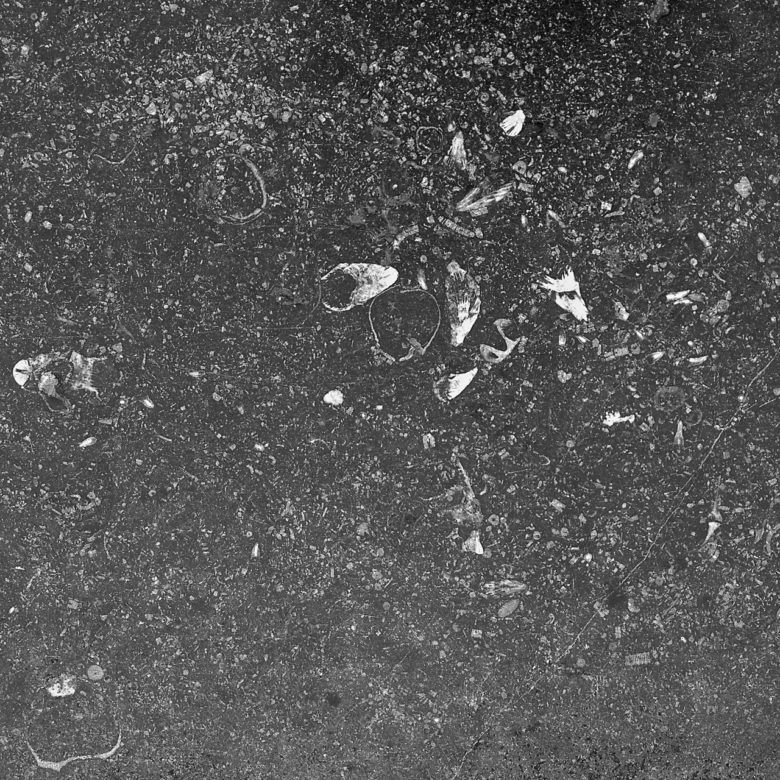 Other flattened animals under my feet: a crushed rat, and another one. The first one lies right before the entrance door of a posh shop in Brussel’s fashion quarter – next to shoes that range from 500 to 800€. I’m not the only one who takes note of the long tail. Two small children walk along with their father; the boy and girl stop right away and scrutinize the rat corpse. The father patiently explains the anatomy, pointing out details. Children and artists seem to have similar modes/hierarchies of perception. Curiosity rules. 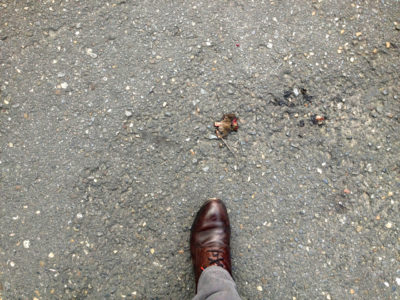 Yet another kind of traces appears right in front of the Q-O2 workspace today in the morning. A film archive in the basement is being emptied. A container on the street quickly fills up with heavy rolls of analogue film, partially packed in metal boxes. I am immediately attracted by the material: film rolls, similar to books, magnetize me. 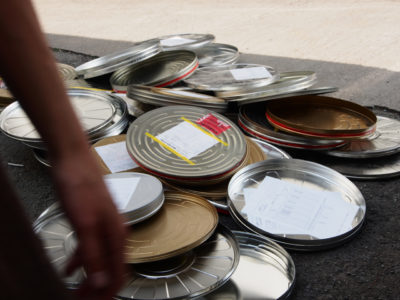 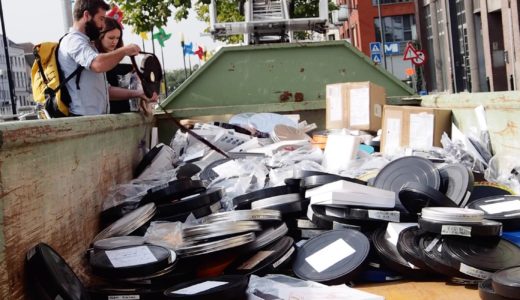 Other people also stop, look, and everybody begins to talk, in English, French, German. People mention the material, talk about the amount of work that is abandoned, and about how the archive of the world deteriorates. The fact that the realm of the analogue vanishes seems to touch everyone, we communicate. Many people take rolls with them; I gather a few. A man calls his partner and then stacks a huge pile on his bycicle, to carry it home. 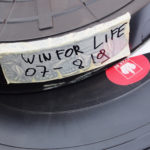 Back in the workspace, I perform and record the Song of the Flat Rat with my contrabass recorder.

The first piano I encountered in Brussels was this posh beauty at the airport. It was just being tuned by a professional who worked with single-minded concentration amidst the bustle around. 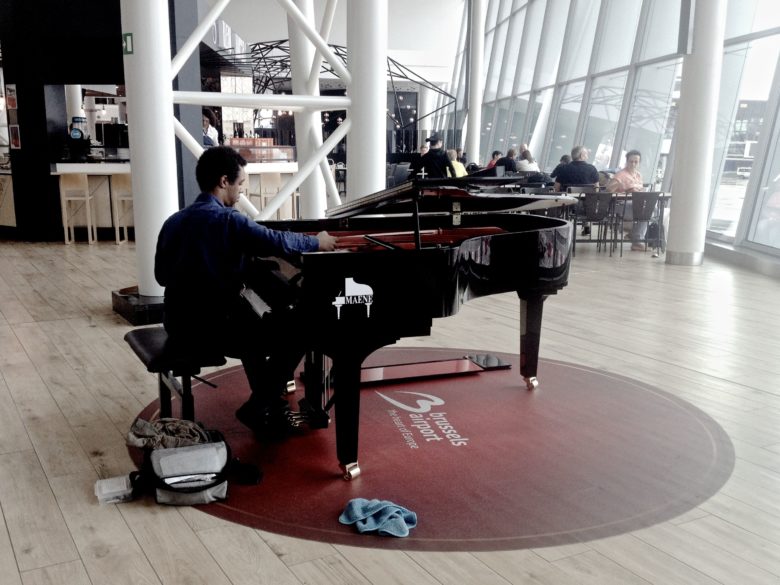 The beaten and deconstructed upright piano at q-o2 attracted me from the first moment I saw it. Why is it that I cannot resist touching it every time I walk by? I discover traces left by other performers. Delightful personal noises. 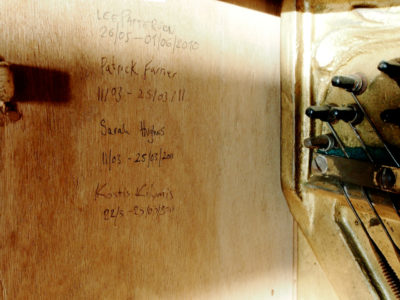 Again, John Donne’s poem resonates with me. It’s an amazing poem; I really like how Donne writes about Europe and the continent, all of mankind belonging together – in the early 17th century in England! An early example of thinking beyond nationalities. 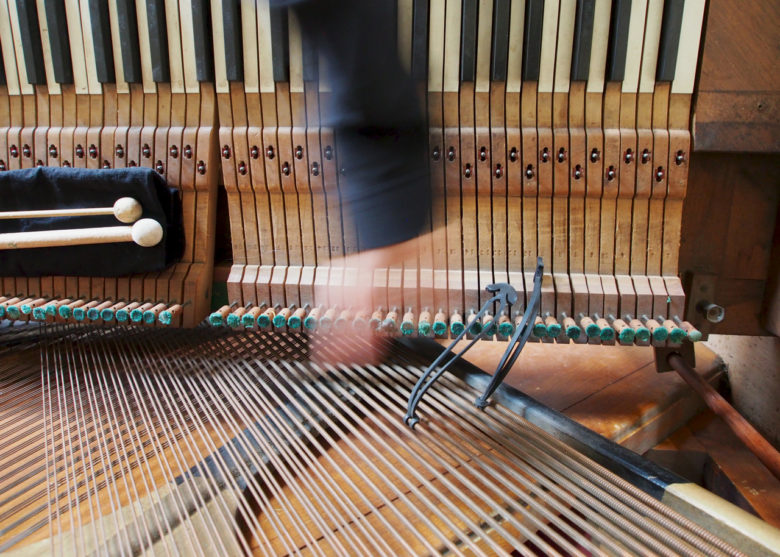 I like that even the remnants of black and white keys sound slightly different when beaten with a wooden stick. The elephant’s white skeletons dance between dark trees in the space of my imagination. 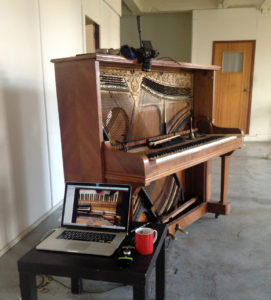 A first caption for my residency in Brussels manifested as I walked through gusts of wind and rain from the apartment to the Q-O2 workspace this afternoon. I encountered a miniature island right there before me, set in the middle of a miniature ocean of its own. 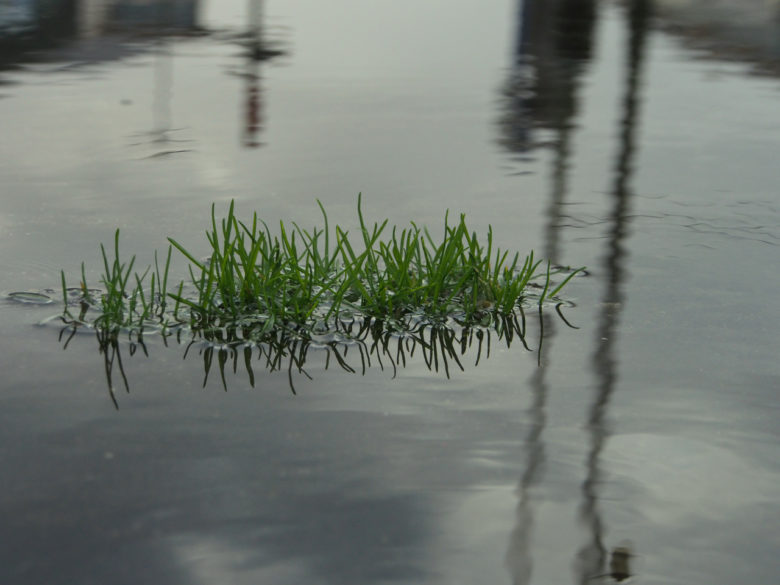 I came here with a plan to listen into the city (which is more quiet and empty this time of summer), into it’s very structure. For me that includes the urban space as such, the buildings, roads, pathways, canals, architecture, the spatial design. Also trees and plants, animals, if there are any that I may see. That includes the human layer: the more obvious part performed by the people present, but also the traces of those not present (any more).

As I negotiated my way from the airport to the workspace I got lost in the metro station, and received spontaneous advice from a man who noticed my helpless state [this is my first time to Brussels]. Holding on to my instrument and luggage I listened to his description of where to go. His entire face and grey hair was soaked with water, dripping as if he had just stepped from his shower. Later, emerging from the underground station into the heavy rain, I got my first direct exposure to local weather. Its oscillations between substantial rain, clouds, a bit of sunshine, gusts of wind, and damp warmth kept me busy for the rest of the day, as I took excursions into the neighbourhood. 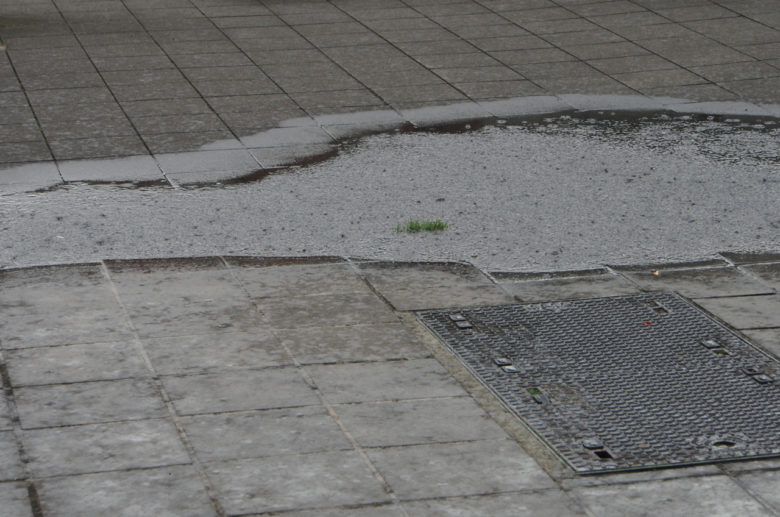 John Donne’s iconic line[1] ‘No man is an island’ came to my mind. However, in the context of my work his line must be translated into modern language – into feminist language.

No man – no woman – no citizen – no person – no human being – no non-human being, too – no whatever identified being, but also no plants and no animals. No islands and no ocean. Nothing is separate, even the ocean or pool right here before my feet is embedded in a bigger scene, which again is embedded in the city, in Europe, and so forth. The fluid surface of the pool mirrored the weather, the people passing by, the cars, the clouds; it was touched by raindrops and by the wind. I noticed traces on the ground: cyclists have passed through. The wheels left traces like drawings. The lines tell stories, they talk of people who have crossed over this spot before I came here. 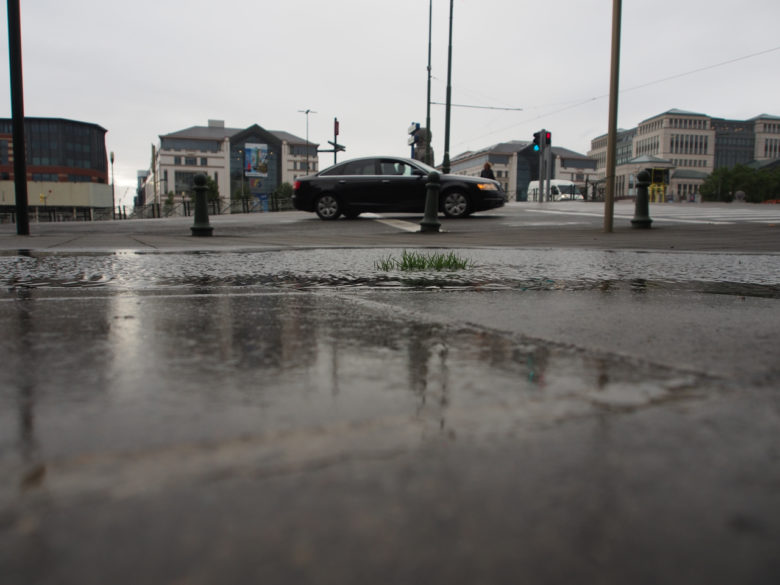 As I notice these background layers of information, I become transformed: I begin to listen. Before, I had been looking. Listening is where background information comes into play, where my perception penetrates through the surface layer into another level. This deepening still is a mode of perception. It is not imagination yet, because this activity of my consciousness is still linked to what I see, hear, smell, touch in my environment. It involves my senses and the ‘outside’ world.

As to the above mentioned terminology of ‘man’ vs. ‘woman’ or ‘being’: I decided for the term noise. Every being brings it own noise to the polyphony of voices that coexist in this moment. Their noise lingers on, leaving traces that can be read by those who come later.

The diverse (female identified) members of the network female:pressure[2] recently discussed what could be a precise term to collectively address the members of the mailing list, so that everybody would feel included. The exchange was intense, lively, passionate, and altogether established a rich assembly of perspectives; differing personal histories were shared to underpin the individual standpoints.

As artist Meredith Kooi pointed out, some already existing terminologies can be found under:

 
[1] for the complete poem see https://web.cs.dal.ca/~johnston/poetry/island.html 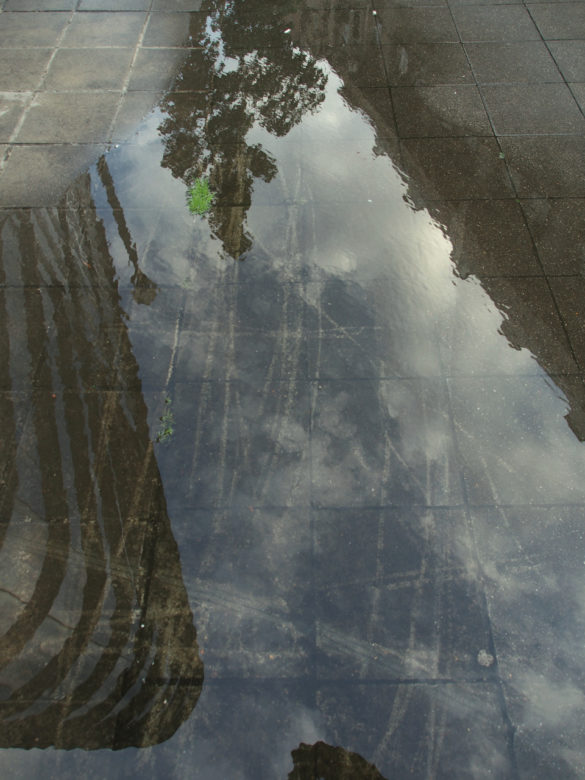