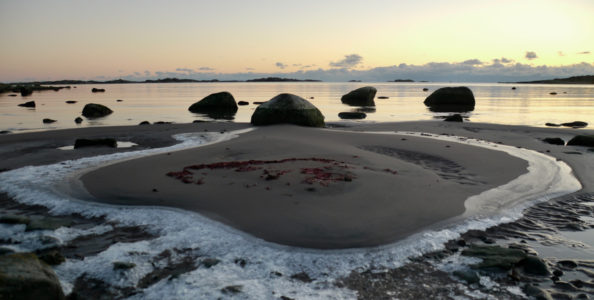 Winter has finally come to the archipelago. I took a last walk to the northern tip. This end of Örö is almost always windy and colder than the southern and eastern shores, although the distance is only few kilometers. The late afternoon light was dim with dreary clouds and a snowstorm approaching. At the same time, a dark grey Finnish warship had appeared in western direction. Military performances were being held right in front of the shore. Heavy gun fire erupted at irregular intervals. I could feel the strong detonations in my body; the loudest ones always blasted in quintuples. On the stony shore, I found a spot full of bleached and twisted juniper wood. In my imagination, the woods evoked the image of a baroque sculpture garden. In the midst of the wooden forms I spotted torn remnants of a seal carcass. Another layer of biological baroqueness. I recorded, took pictures, and filmed. A feast for the eyes, in low phenomena terrain. 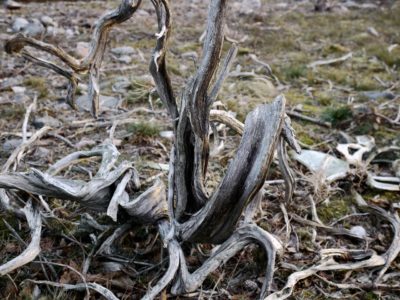 On my way back I met a brown eagle. Eagles occur in boreal forests, as I have been told. With dusk falling in, I quietly moved along the shoreline. Shrubs and sparse trees were standing below, closer to the water. The huge bird flew off from one the juniper bushes nearby, appraoched me from behind and passed me just by my left shoulder, less than two meters away, quickly disappearing along the path and higher into the forest. It came so close that I felt like I could hold on to its back and take off. I clearly saw its feathery head and the muscular shoulders moving its strong wings. I have never seen a flying eagle from this perspective, let alone that close. 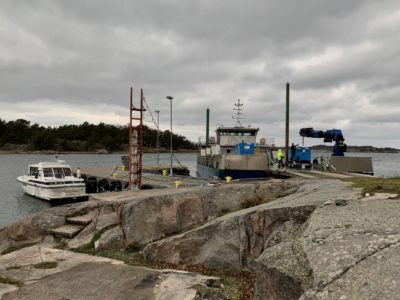 I have now returned to Helsinki. The journey took seven hours, including two hours that Marja and I had to spend waiting at the Örö harbour, while the ferry got ready for departure. At this time of the year, there are no fixed schedules for ferry rides; everything must be negotiated according to various professional needs. Heavy machinery was unloaded and brought to various places at the island. The machines will be used for building purposes; several of the century-old wooden houses are being renovated. At the same time, all power supplies on the island were shut down. Our residency was cold, without light and water. The truck then went back to the mainland with the ferry, too. 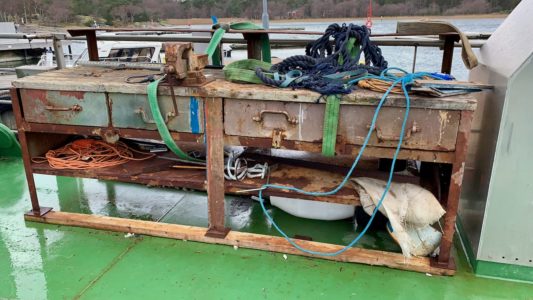 The boat was old and weathered. I immediately feel in love with the ancient workbench on deck. The experienced captain steered in his socks. The strictly observed Finnish rule to take off one’s shoes whenever entering a house was to be followed in his cabin, too. With a carpet on the floor and an orchid in the window, this cabin was a living room, indeed. Outside the weather was stormy, waves quite high. A hitchhike towards Helsinki greatly helped Marja and me on our way home. A construction engineer whom we met in the ferry offered a ride to us, including our bulky luggage. From Kasnäs, at this time of the year, no bus connections to Helsinki are available; we were truly lucky. 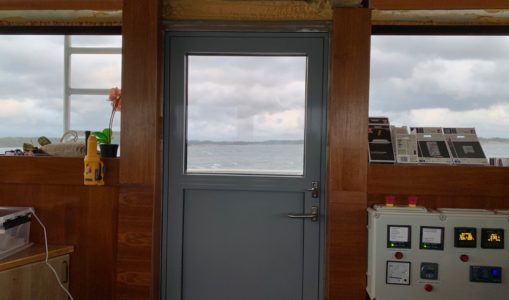 I’m back to urban life, to people, cars, roads, city noises, shops, flashing lights all over. At the moment, it is nearly impossible to find words. I’m in a state of in-between.

I carry the imprint of an island on my heart.